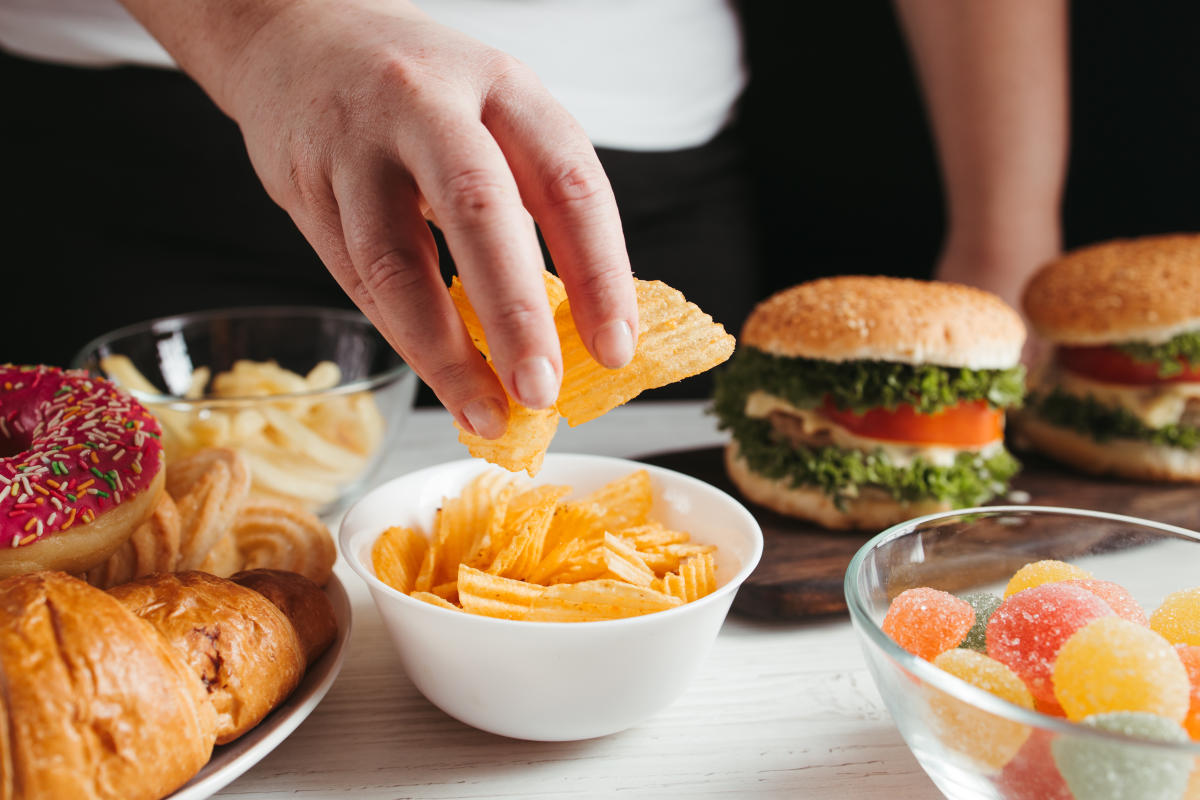 Junk food and fast food are craveable and delicious, but it’s no surprise these meals and snacks aren’t the first thing that comes to mind when considering which foods should be part of your next healthy meal. Tie in reports of toxins found in the foods we love to grab on the go, and the decision gets more complicated.

But are foods like chicken nuggets, candy and cheese pizza simply not the most nutrient-dense choices, or do they pose a risk to human health when consumed?

Toxins in our treats?

Last month, a California lawsuit claimed popular fruit-flavored candy Skittles are “unfit for human consumption” because of titanium dioxide — a chemical used to help the candies secure and keep their colorful hue. DJ Mazzoni, a New York-based registered dietitian and medical reviewer at Illuminate Labs, says the lawsuit is unsurprising.

Mazzoni says when looking at ingredient labels, consumers in the US should watch for ingredients and additives banned in other countries, specifically calling out titanium dioxide. “It’s banned as a food additive in the European Union, which has much better consumer protections than the US,” he says. “This ingredient may be toxic to humans and it provides no nutritional benefit, so I would recommend avoiding all processed foods containing titanium dioxide.”

Of course, titanium dioxide isn’t the only harmful additive possibly contained in junk foods. And, this lawsuit isn’t the first time food in the US has been found to be potentially hazardous to human health. Documentaries like Super Size Me, for example, had consumers reevaluating their love for McDonald’s chicken nuggets, along with the entire fast food industry, as far back as 2004.

The problem with phthalates

In 2021, researchers from George Washington University, including environmental health scientist Lariah Edwards, conducted a study on potentially harmful industrial chemicals detected in fast foods in the US The result? The study found popular fast food items from beloved chains contain phthalates, a group of chemicals used to make plastics soft, which are known to disrupt the endocrine system.

“Phthalates are a class of chemicals used heavily in plastic materials, such as food packaging and food processing equipment,” Edwards tells Yahoo Life. “Replacement plasticizers, also known as ‘non-phthalate plasticizers,’ are chemicals used instead of phthalates, since some phthalates have been banned from use.”

“The phthalates we detected are worrisome because some — like DEHP and DnBP — have been consistently linked to reproductive, developmental and endocrine health problems in both animal and human studies,” she adds.

According to Edwards, unlike phthalates, the replacement plasticizers studied — DEHT, DEHA and DINCH — are less understood. Because the available scientific studies provide limited information regarding toxicity and health effects to humans, the increase in use of these chemicals and their effects on human health are poorly understood. Still, she believes the possible long-term effects are deeply concerning.

“Diet is the primary way people are exposed to phthalates,” says Edwards. “And certain racial and ethnic groups in the US, like non-Hispanic Blacks, are more likely to eat fast foods than others because of many factors, such as decades of racial residential segregation.”

“This may lead to exposure inequities,” she continues, “so, if other chemicals are linked to fast food consumption, there is a chance that certain racial groups are highly exposed to those as well.”

A lack of knowledge about the foods we consume

How much does the average consumer really know about what they’re ingesting from day to day? Anthony Zirfas lives in Orlando, Fla. and says sometimes it can be difficult to know the difference between what’s not good for you, and what’s truly detrimental to your overall health.

“Every year there’s a new study on certain products that are potentially linked to cancer or some other disease,” he says. “The following year, it changes. We are in the age of information and disinformation. Large corporations pay their way past regulations and occasionally create regulations that support their own agenda. It’s hard to tell what’s real, what’s true and what actually has a large effect on you from a health perspective.”

Andrew Livesay is the voice behind Ouch My Body, a Chicago-based physical and mental health blog that aims to inform the public on health-conscious improvements they can make in their lives, specifically by providing advice on healthy food choices. Livesay says many popular junk foods contain harmful chemicals and dyes that can be dangerous.

“Some of these chemicals we love include artificial flavors and colors, preservatives and synthetic sweeteners,” he says. “These chemicals can cause a variety of health problems, including cancer, birth defects and neurological damage.”

What about sugars and sweeteners?

Dr. David Culpepper, the Kentucky-based clinical director of LifeMD, has been practicing general internal medicine for over 30 years. Culpepper agrees sugars are a genuine issue in most junk foods.

“This includes sucrose, fructose and high-fructose corn syrup,” says Culpepper. “These additives are particularly dangerous because not everybody recognizes that the names correspond to simple sugars. Too much simple sugar, as opposed to complex carbohydrates like whole grains, is associated with any number of illnesses, including obesity, diabetes and an increased risk of cancer .”

Dr. Naheed Ali of Miami, Fla. physician and contributor to USA RX, warns in addition to additives in food, the packaging can be part of the problem. “Many processed and packaged foods include hazardous chemicals and dyes,” says Ali, “for example, candy wrappers, beverage bottles and even canned ravioli can contain bisphenol A (BPA), a dangerous plastic toxin. BPA ‘drips’ into the body and affects hormone receptors, which can cause brain and reproductive issues.”

With so many different additives and chemicals in processed foods today, it’s understandable that consumers may feel like avoiding the majority of them at all costs. Maura Caruth, who lives in Lincoln Park, NJ says she avoids most processed foods. “I really prioritize what I put into my body,” she shares. “Sometimes when I go out to eat or am spending time with family and friends I ease up, but day-to-day at home, I avoid it all. I think it makes a huge difference in long-term — and short-term — health.”

Can you offset the effects of junk food?

At times when junk food and fast food feel impossible to avoid, can anything be done to lessen the impact of a day of fast food runs and junk food eats?

“Eating foods high in antioxidants can help ameliorate some of the harmful effects of inflammatory processed foods,” says Mazzoni. “Eating a salad after eating a fast food pizza is a lot healthier than eating a pizza alone.” Mazzoni adds what we drink can be beneficial as well, “drinking enough water is especially important when consuming processed foods because these foods tend to be high in sodium.”

According to Edwards, another great way to reduce risk is to avoid choosing fast food and junk food meals that contain meat. “Generally, eating fewer fast food meals is also a good way to reduce exposure,” she says. “However, this is not a feasible option for everyone, as fast food meals are a cheap and convenient way to get food on the table”

“For people who want to reduce their exposure to phthalates and replacement plasticizers in fast food,” she continues, “based on our results — choosing meals without meat is a good way to reduce exposure to these chemicals.”

Livesay adds no matter what you eat, it’s important to ensure your body’s nutritional needs are met.

“If you must eat junk food, I would recommend getting all the important vitamins your body needs via over-the-counter pills,” says Livesay. “While there’s no definitive answer, most experts recommend limiting junk food to only occasional indulgences: This means eating fast food or processed foods only occasionally and opting for healthier choices most of the time. It’s important to be aware of what you’re eating and to choose healthier options whenever possible.”

Wellness, parenting, body image and more: Get to know the who behind the hoo with Yahoo Life’s newsletter. Sign up here.