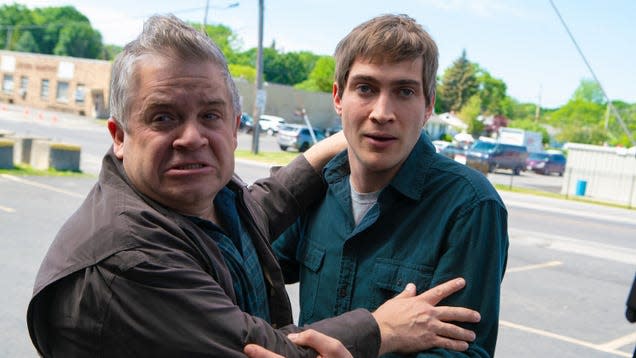 In the pantheon of cinematic bad fathers, there will always be a place for Chuck (Patton Oswalt), the mendacious screw-up of an absentee parent in writer/director James Morosini’s I Love My Dad, a film that is both modest in presentation and epic in cringe. Chuck is a fast-talking loser with a bottomless well of unconvincing excuses as to why he’s not there for his long-frustrated son, Franklin (Morosini). So when Franklin is released from a mental health facility after attempting suicide, his healing process includes cutting all ties with his toxic father. The desperate Chuck reacts the way any horrible dad would: by catfishing Franklin with a phony Facebook profile using photos of an attractive young waitress named Becca (Claudia Silewski) at the local diner. After the depressed Franklin accepts Becca’s friend request, he falls in love with his online-only “girlfriend,” forcing Chuck to go to increasing lengths to continue the ruse.

Morosini, in only his second feature as director (after 2018’s Threesomething) is insistent upon taking this idea as far as it can go, as if testing his own commitment to his central premise and our ability to stomach the result. Some moments will test the fortitude of the heartiest up-for-anything moviegoer, including a scene where Franklin masturbates on the toilet to racy texts he thinks were sent by Becca but were actually sent by his father in the next room. Morosini, though, is smart enough to know that just grossing us out for 95 minutes is not a movie. So he tries to make his film dramatically credible. This proves more difficult, as he has nothing new or insightful to say about father-son relationships or the pernicious possibilities of social media. But managing to push the squirm-inducing envelope while still getting us to root for a reprehensible dad becomes its own sort of twisted achievement.

From the get-go, Morosini proves he’s not afraid of taking a risk even if he hasn’t quite thought through how each individual risk would affect the whole. Putting the formerly suicidal Franklin in such a dangerously fragile state is excessive and only serves to make Chuck’s Facebook deception painfully cruel. Morosini undercuts this to some degree by playing the role of Franklin as if under a stuporous cloud of emotional vulnerability that makes it more plausible that he’d fallen for his father’s ploy.

There are less idiotic ways, of course, for Chuck to reconnect with Franklin. But Chuck is the type of misguided fool who would reject the best solution in favor of whatever bad solution pops into his head at that particular moment. So inspired by a casual anecdote from a co-worker (Lil Rel Howery, a hilariously deadpan voice of reason), he catfishes his own son. Despite the imaginary Becca’s relatively sparse Facebook profile, Franklin accepts her friend request. Initially, Chuck earns some family friendly laughs as he struggles to write texts that sound like they’re coming from a woman half his age. As their SMS-only relationship heats up, Chuck must tap dance around Franklin’s desire to talk and video chat with his “girlfriend.” Eventually and reluctantly, he agrees to drive Franklin to Maine to meet Becca, getting us closer to the inevitable moment when his destined-to-fail plan finally implodes.

At times the mind drifts to what the Farrelly Brothers, Seth MacFarlane or Matt Stone and Trey Parker would have done with a story that seems to beg for a more outrageous or farcical approach. Morosini’s style is purely functional with very little snap or polish. But this actually works in the film’s favor. Although the movie is deeply uncomfortable in spots, what with the social media-enabled incest and all, Morosini doesn’t rub our noses in it, and humiliating his characters is not his goal. He also finds nifty ways to dramatize what are essentially two people continuously typing on their phones. When Franklin and “Becca” are texting, she’s physically in the scene and interacting with him, reading Chuck’s SMS’s out loud with warmth, glee, earnestness or, during one cute moment, by pronouncing every typo. This not only skillfully overcomes a storytelling challenge, it also speaks to how a lost and lonely person can create a full-bodied relationship based solely upon texting. The creep factor kicks in later when Chuck is forced to sext with Franklin lest he start getting suspicious. In one frantic and well-played scene, Chuck copies and pastes the R-rated texts he’s been receiving from his girlfriend (a droll Rachel Dratch) and sends them right to Franklin.

If making the audience cringe was all I Love My Dad had I offered, it would be a nasty and forgettable stunt. Morosini claims the film is based on an incident that really happened between him and his father, so there was an opportunity to pay some authentic lip service to difficult family relationships. He gives it the occasional shot but he’s not insightful enough to get beyond the basics. Oswalt, in a career-best performance, easily makes up for this shortfall. And that’s no easy feat. Chuck, whose pronounced underbite betrays a clenched-teeth anger at the problems he’s only brought upon himself, is a reprehensible sad sack crushed by the weight of his lies. Miraculously, Oswalt, who proved in Big Fan he has the chops to go dark, provides enough daylight for us to give Chuck some credit for harboring a genuine desire to be closer to his son.

I Love My Dad is about a uniquely modern violation of trust that lousy parenting made inevitable and social media made possible. Chuck and Franklin use technology in ill-advised ways yet their hearts are in the right place, which counts for a lot when you’re forced to gaze upon a father making out with his son. Morosini’s gentle directorial approach makes the film’s disturbing elements less of a turn off and he keeps us caring about, and understanding, Chuck despite our revulsion. If we’re ultimately not sure what greater point Morosini is trying to make, that’s okay. Consider ourselves honored, if slightly uncomfortable, guests at Morosini’s breakthrough therapy session.